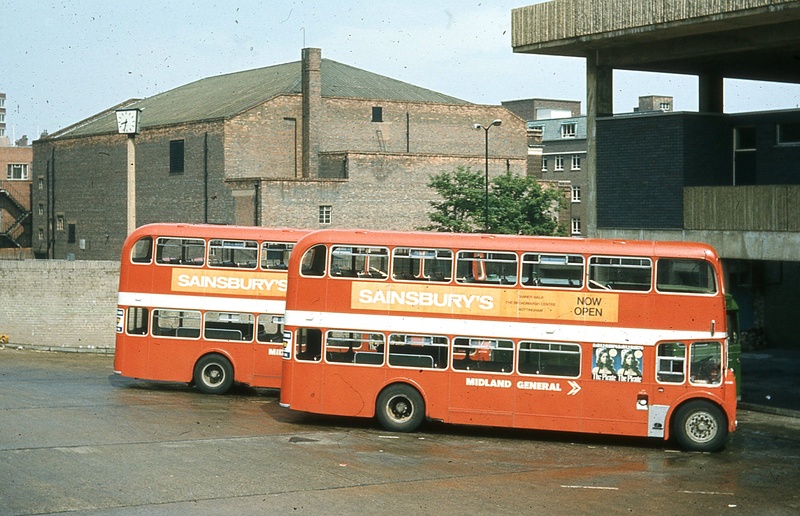 Perhaps a prime case in point here regarding the loss of colour and variety. The Midland General company for many years, in a departure from the standard red or green, used a nice mid-blue livery, however, as with many others it surrendered to poppy red under the new regime.

I can well remember thinking 'what a good idea' when the proposals for Transport Minister Barbara Castle's grand UK transport vision were first made public, however the devil was certainly in the detail. During the first half of the sixties decade I had developed a great fondness for the municipal sector of the British bus scene. After all, these services were then operated largely by local people whose responsibility it was to know and to provide exactly what local people wanted and needed in the way of transport services. Although, undoubtedly most operations of this kind were, by the later 1950s subsidised by the ratepayers of each location they were much respected, valued and identified with by residents. They were, in many cases still at this time a source of some degree of civic pride.The idea though to create great monolithic block authorities with huge areas of jurisdiction to run local buses for local people filled me with apprehension. I could forsee what actually happened in that all those lovely colourful liveries and the variety and peculiarities of individual fleets would disappear to create operations with bland faceless identities. You only have to think of what happened to the dozen or more municipal fleets operating into central Manchester to realise what I mean when the South East Lancashire North East Cheshire (SELNEC) Passenger Transport Executive was created, and of course it also happened in the West Midlands, Tyneside, Merseyside, South and West Yorkshire and Greater Glasgow. The National Bus Company too, formed mainly to take over the interests of the former Tilling Group nationalised concerns began to make its presence felt by replacing the time-honoured though rather bland but solid mostly red or green liveries with something altogether even less appealing - still red or green but in wishy-washy paler shades that did not seem to suit the vehicles as well. Not long after, it swallowed up all the BET (British Electric Traction Group) operations signalling the end of much more of what made the whole scene so interesting.

All this is to justify the fact that this page will not be by any means comprehensive, for I lost a lot of my interest in bus photography when the proposals began to bite in the seventies, and made much less effort. There will therefore be huge gaps in the coverage here but I hope anyway that, as one of the less interesting eras of British bus history, it will nevertheless appeal to some. 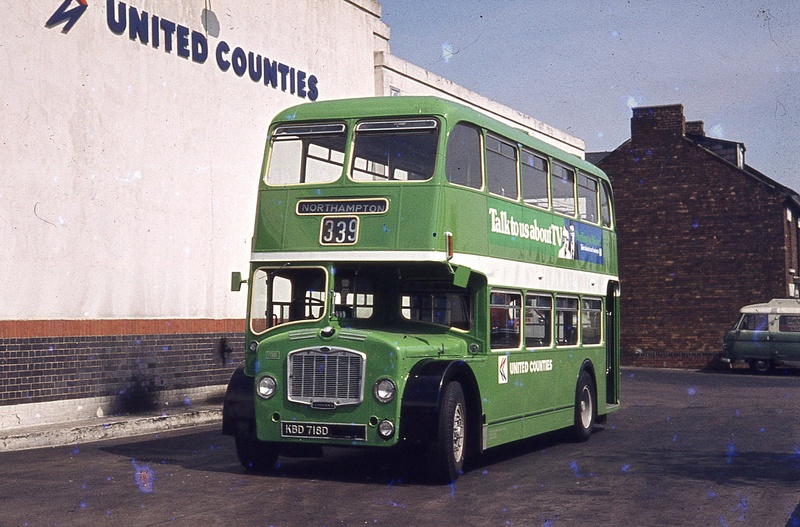 In the later seventies the older generation of standard ex-Tilling group vehicles were still thought worthy of retention and refurbishment. I caught United Counties FS718 gleaming fresh from the paintshop in the evening sunshine at the then Bedford Road Northampton garage. This premises, along with many others post 1986 has now disappeared under re-development, in this case a large complex of flats. 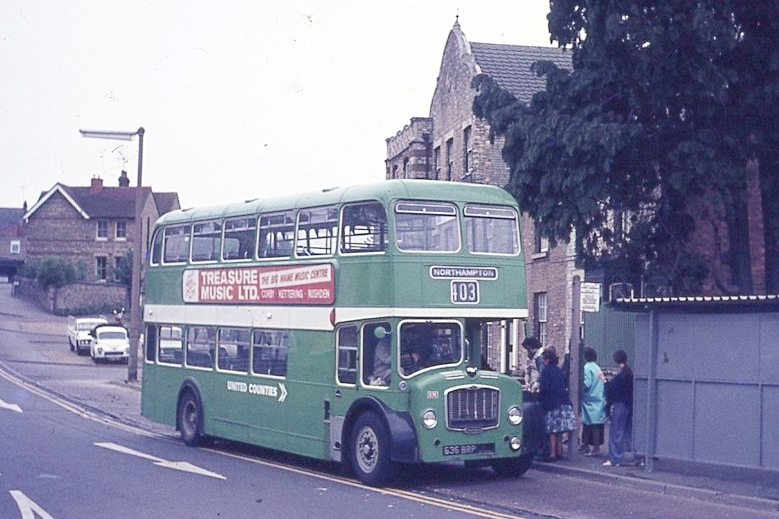 c.1978 - this FLF was about to be my conveyance back home from Rushden 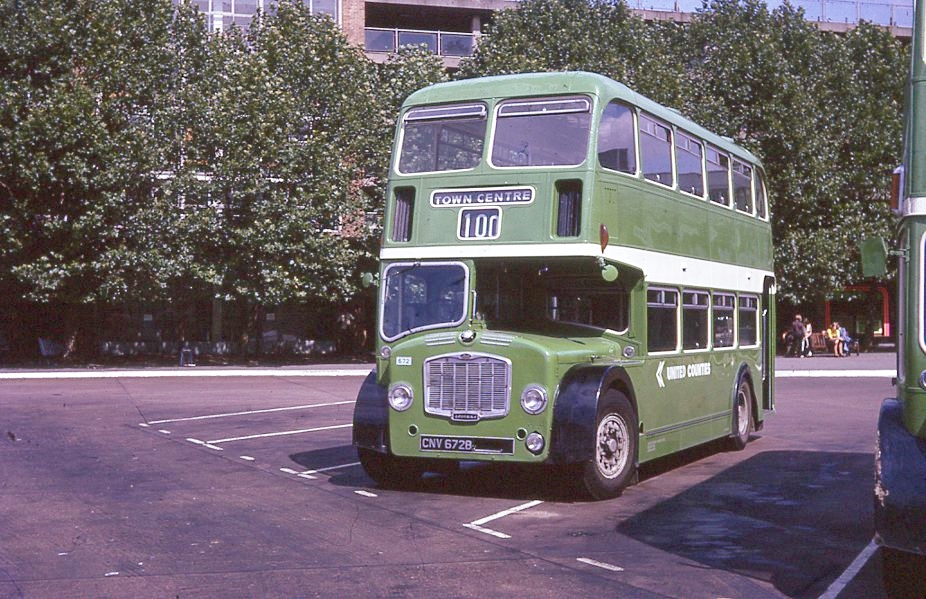 A couple of years older than the example in the first photo here, this FS, on a local Bedford service, had the Cave-Brown-Cave ventilation system fitted. 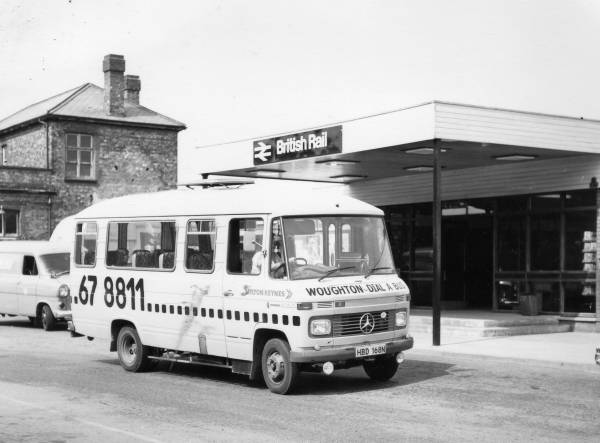 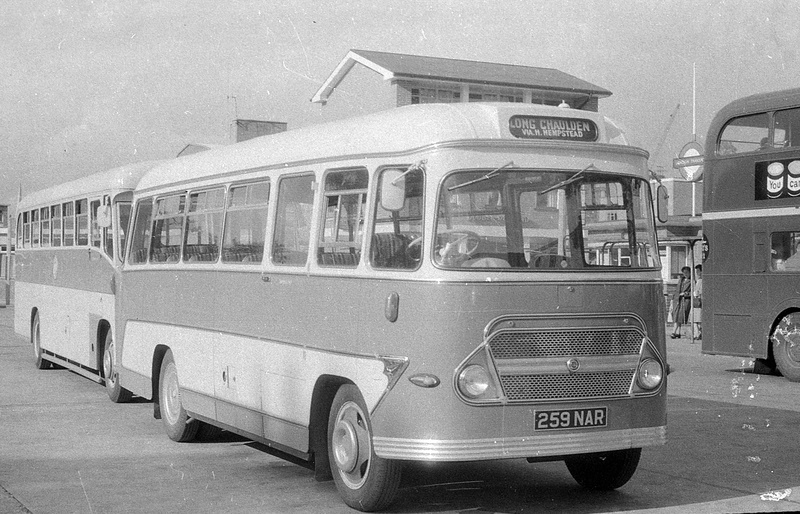 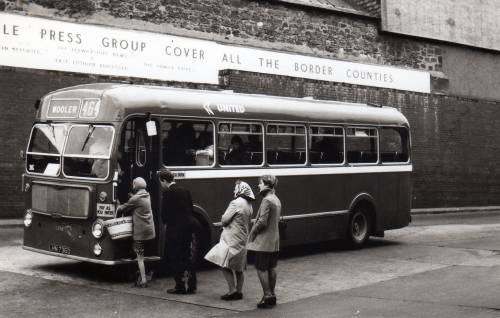 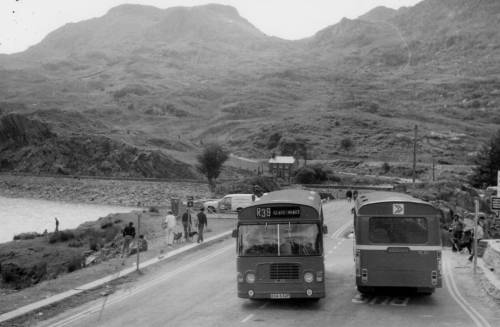 I never did get to photograph much of Crosville prior to its NBC days. Here, in 1978 are a couple of lightweight saloons typical of those used on country routes in North Wales. The one time manager of the pre-war Crosville company W Crosland-Taylor wrote an interesting account of his post-war time under Transport Holding Company control called 'State Owned without Tears' which I recall reading in the early sixties.

When London Transport came under the control of the Greater London Council its Country Area services network was transferred to the National Bus Company taking the title London Country Bus Services. Here's a selection from the very few shots that I took after the changes from early 1970. 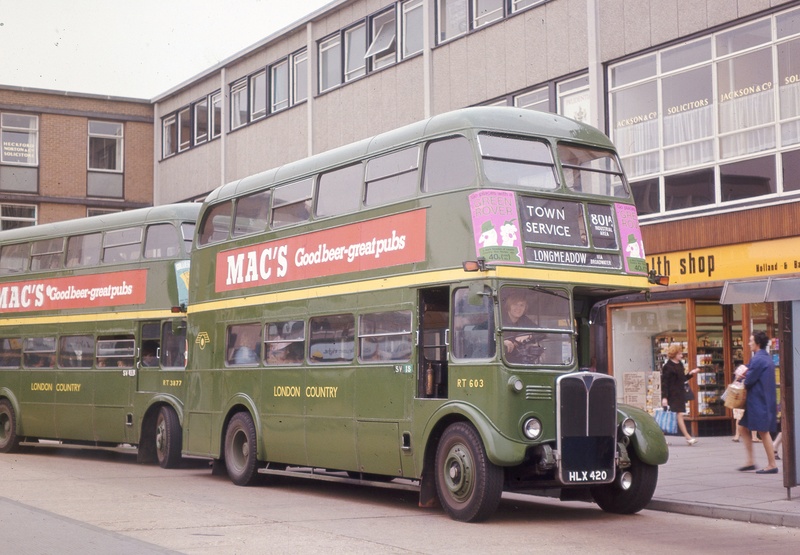 In the beginning large numbers of LT standard vehicles were taken over. RT603 is at Stevenage and shows the interim paler green livery in use early on.These vehicles were quite quickly disposed of. The early logo (rear offside panel) always reminded me of poached egg on toast! 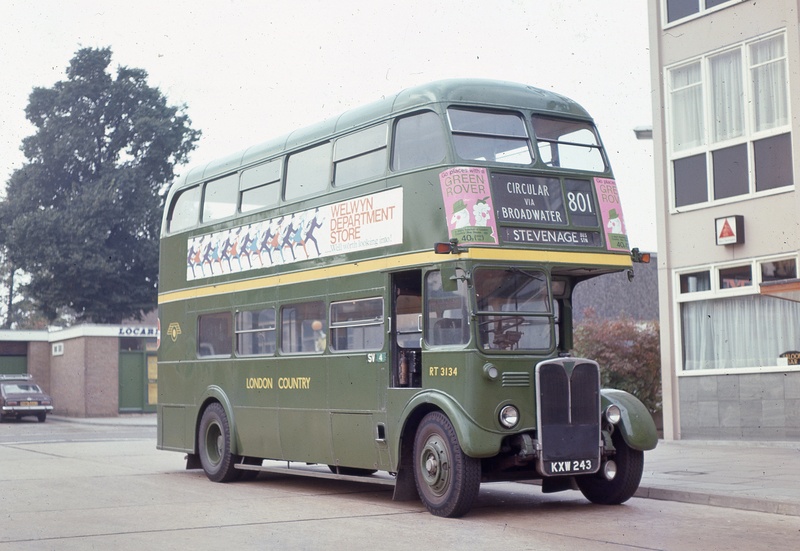 Meanwhile at the same location RT3134 still seems to have retained London Transport's Country Bus Green with new identity and logo. Soon after LCBS adopted standard NBC green but few indeed of the RT's survived in the fleet to be adorned thus. 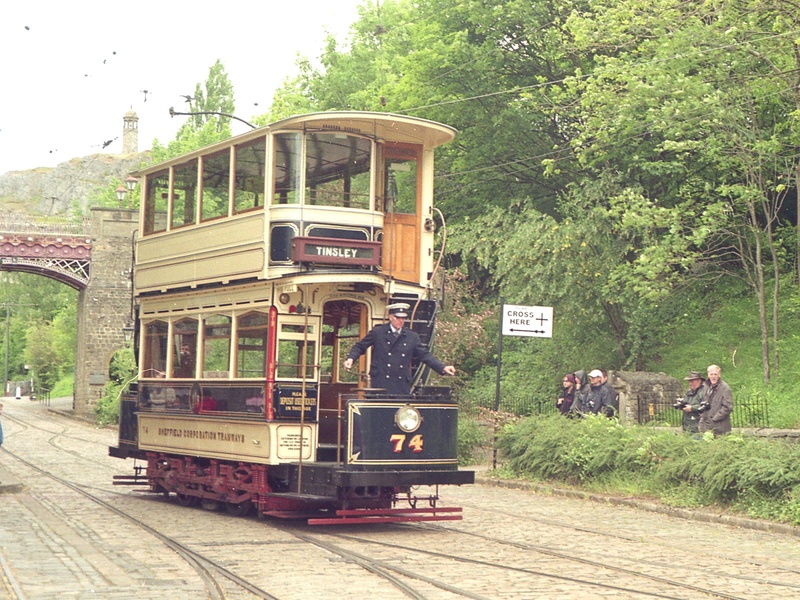 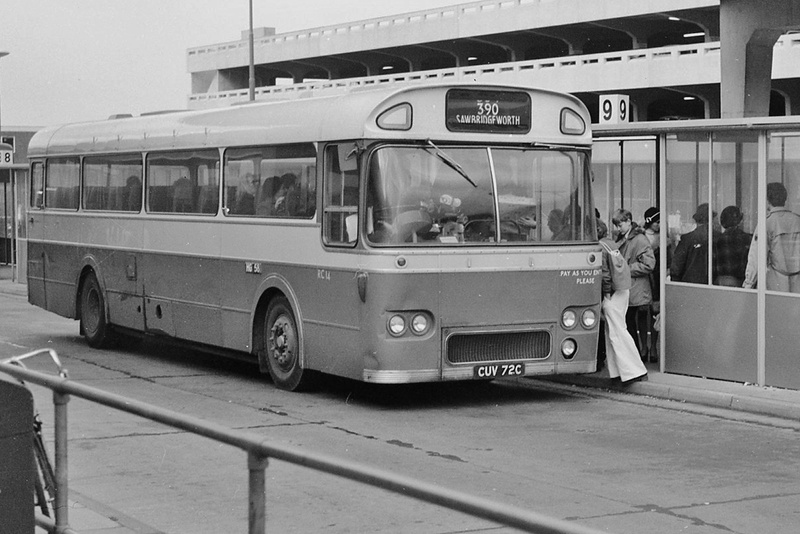 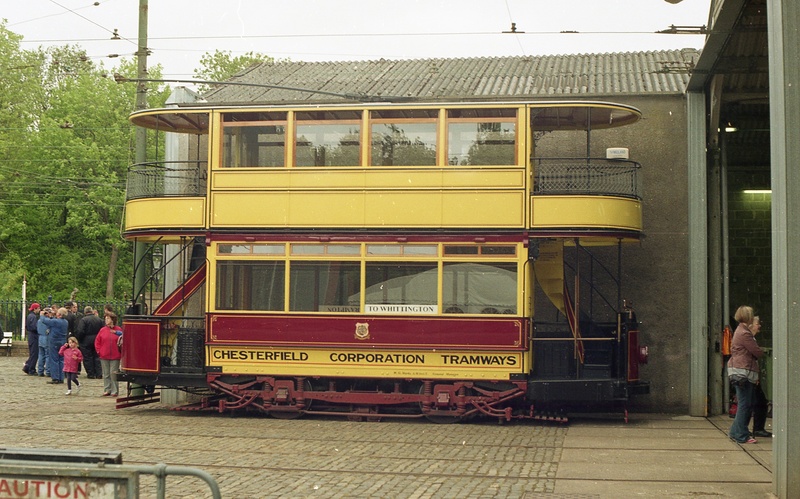 I didn't do much with these, certainly anyway in their earlier and arguably most interesting years. Moving to the east midlands in 1974 put me in somewhat closer proximity to the set up in the Birmingham area known as the West Midlands Passenger Transport Executive which swallowed up the erstwhile Birmingham, Wolverhampton, Walsall and West Bromwich (and later Coventry) municipal operations and the Birmingham area Midland Red services and here's some of the few images that I captured in that decade and the 1980s. To start with then, a few shots from c.1977-78 in Wolverhampton, Birmingham and Walsall. 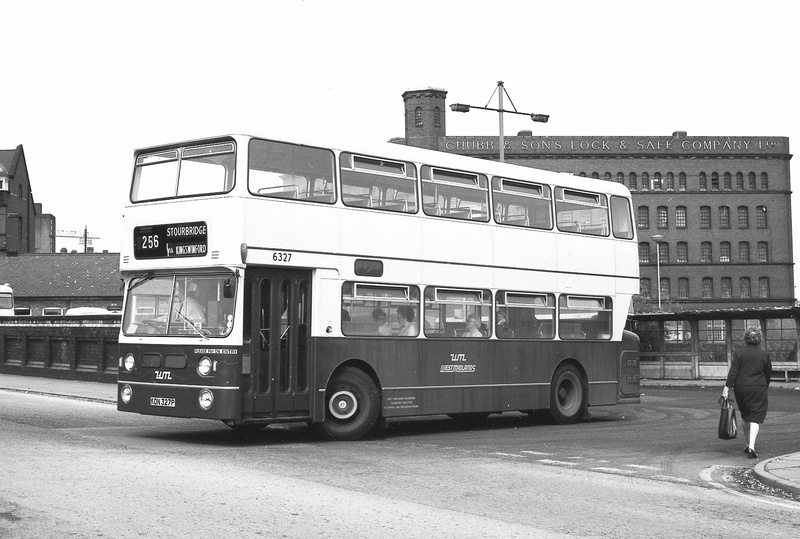 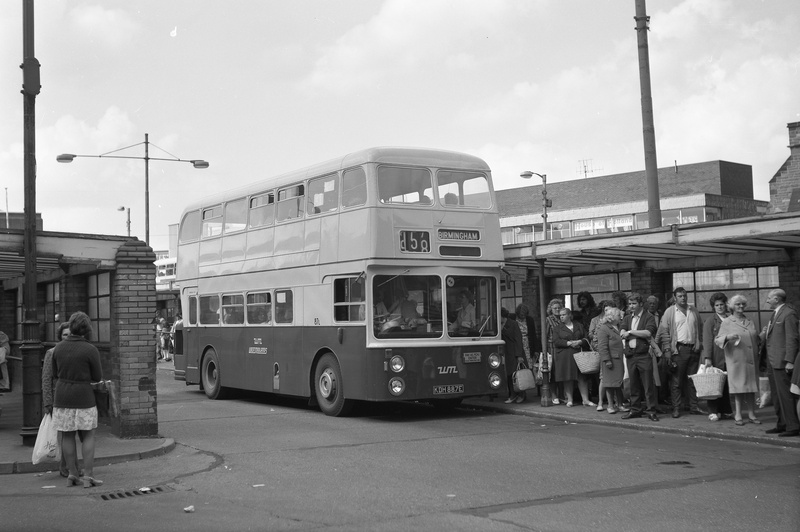 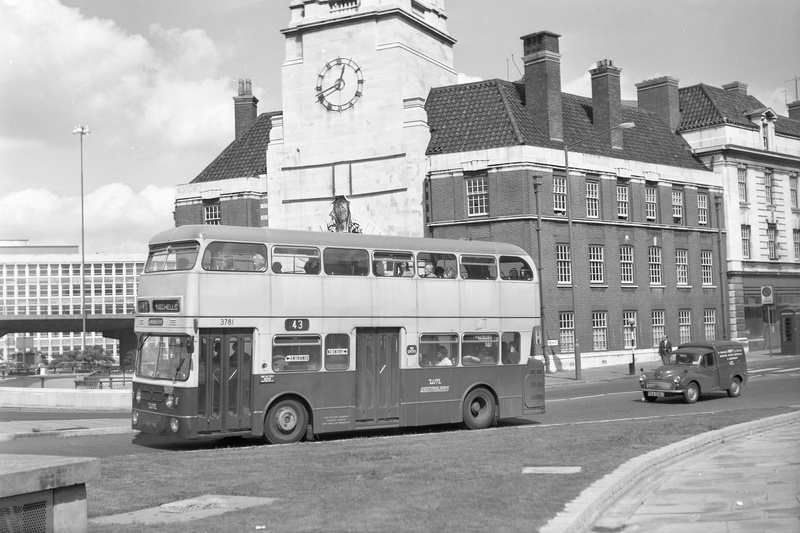 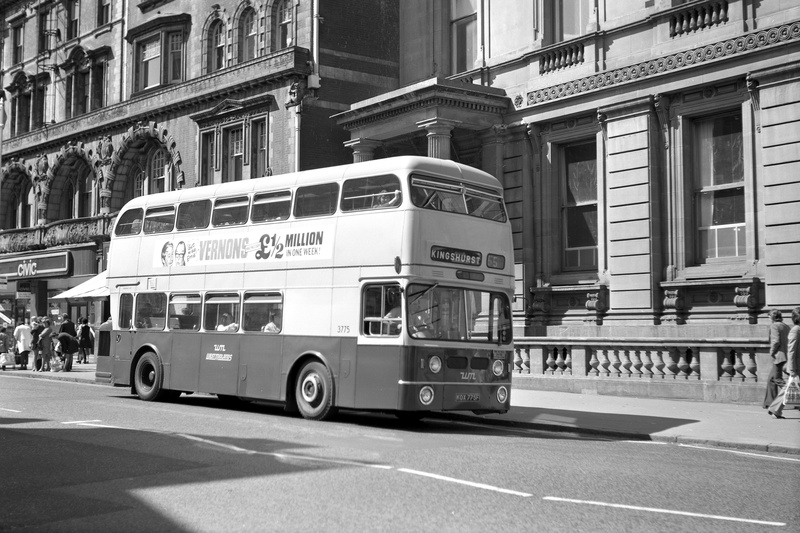 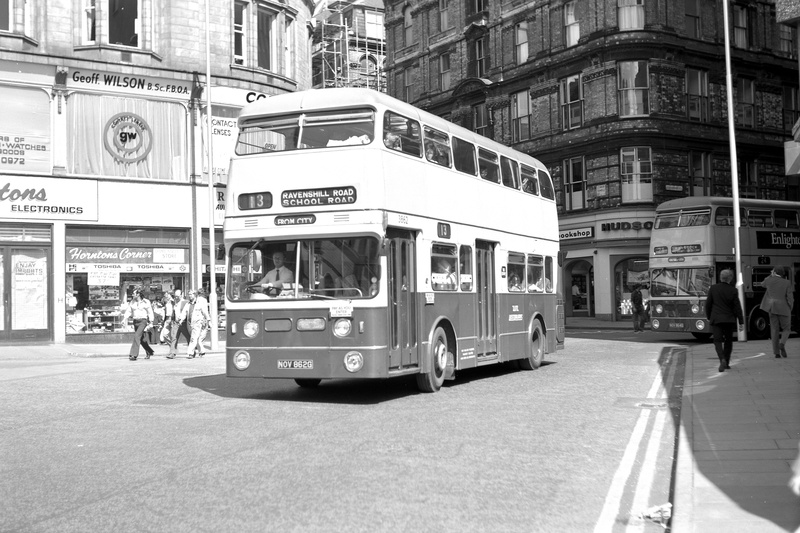 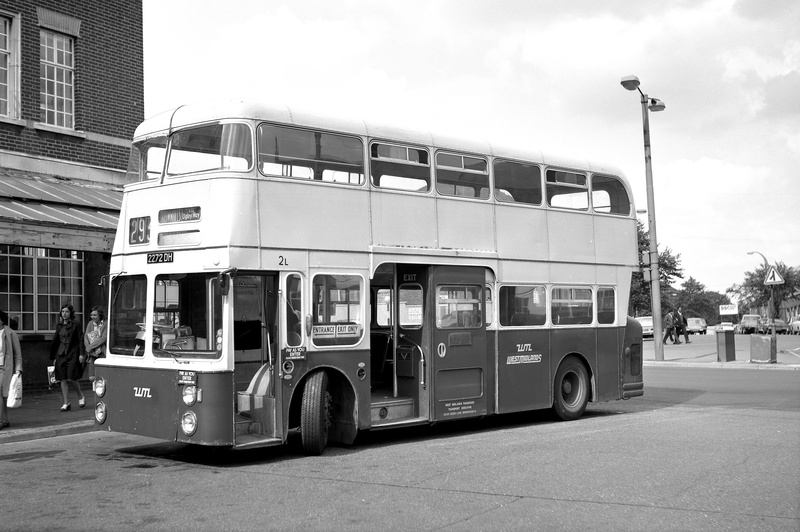 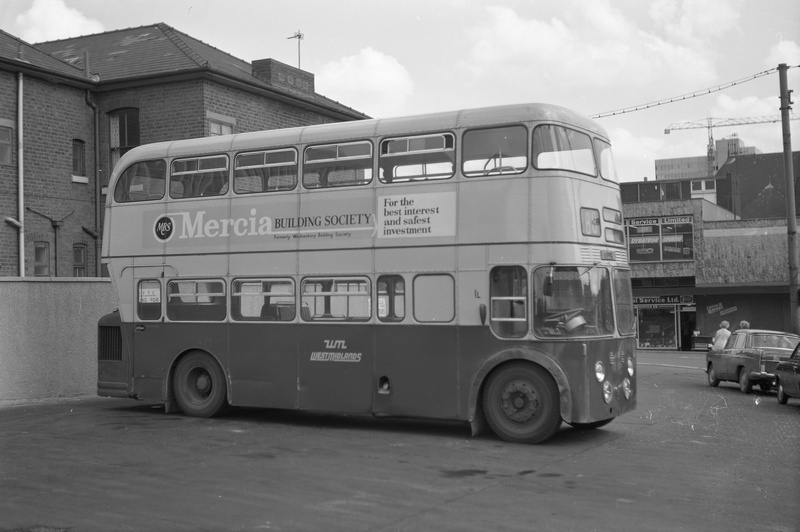 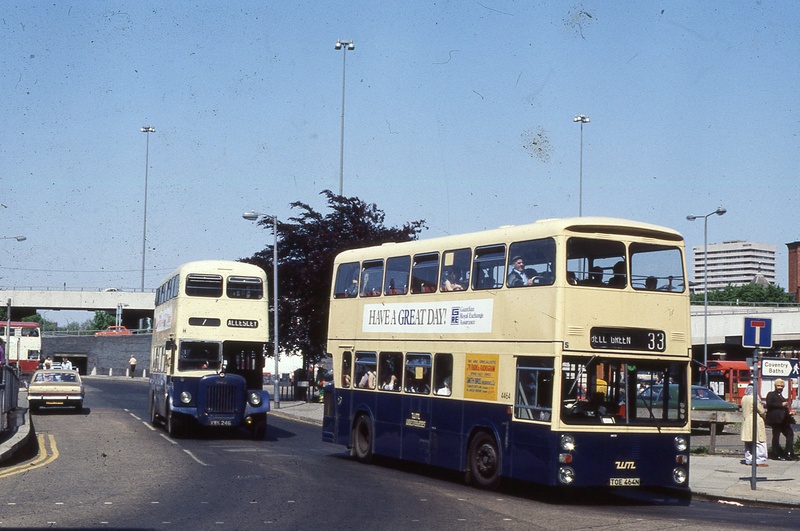 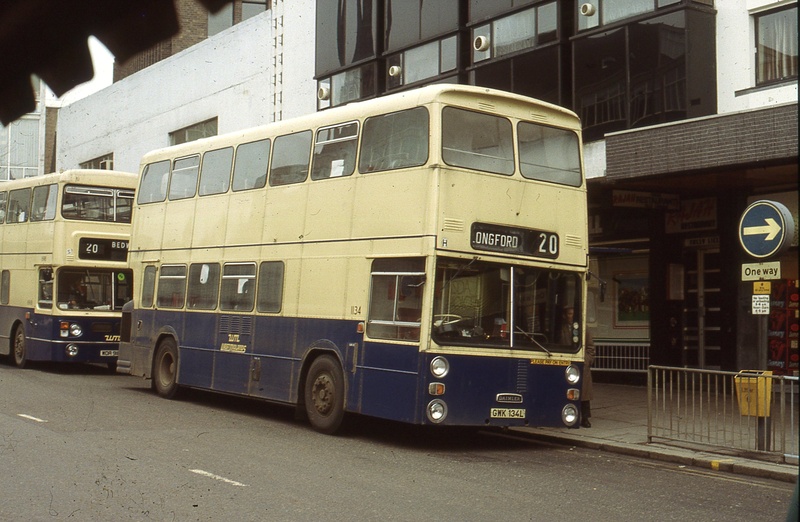 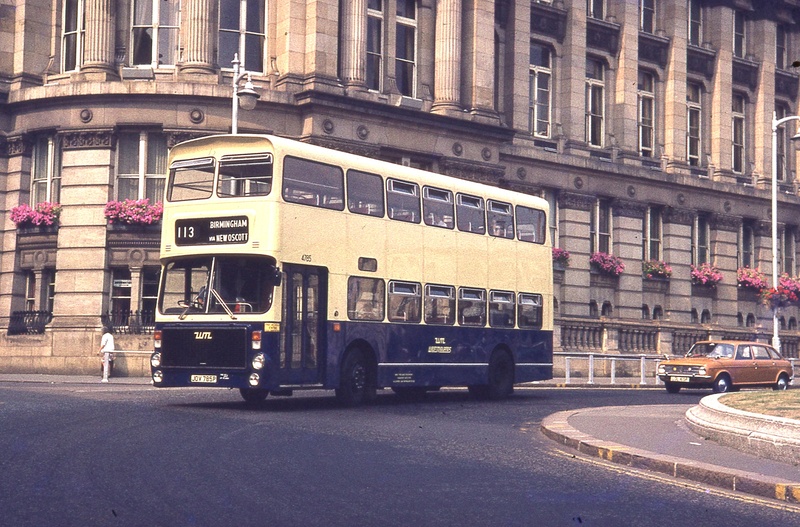 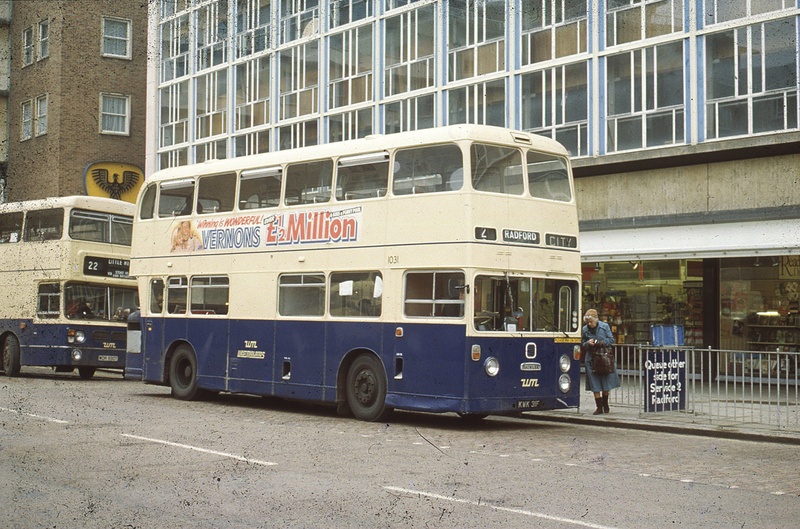 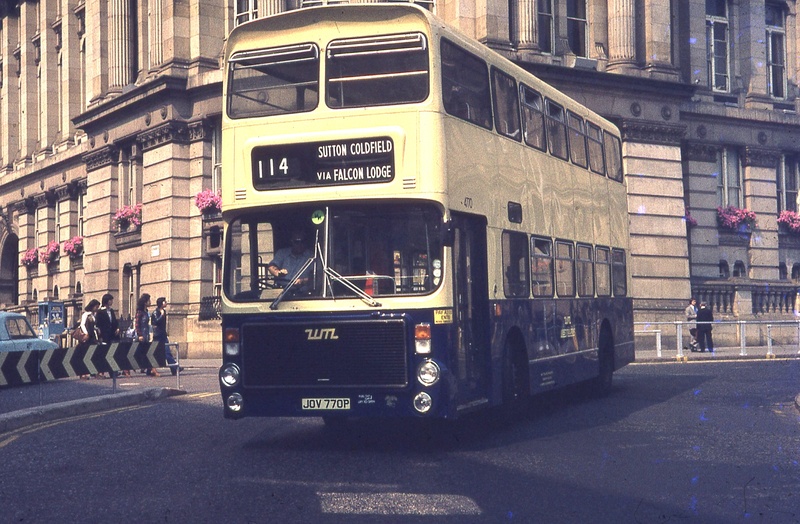 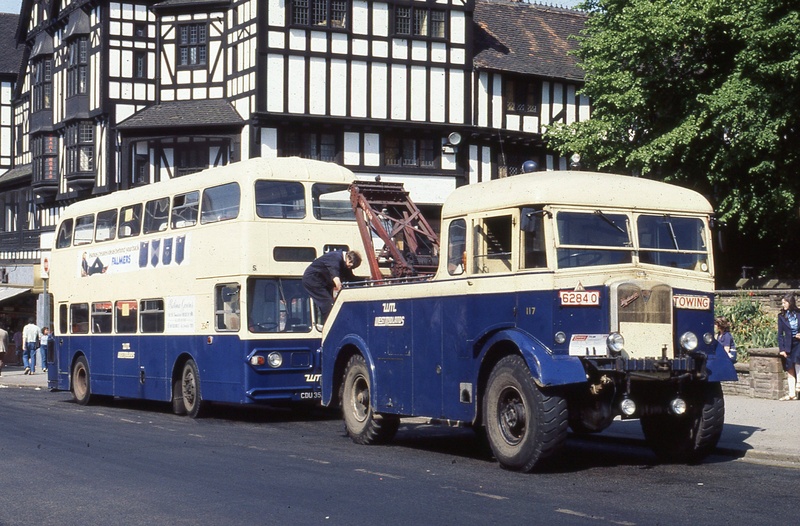 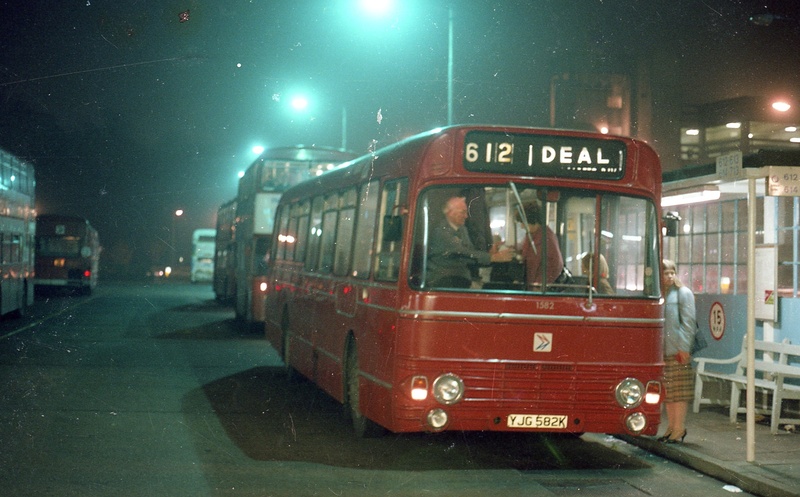 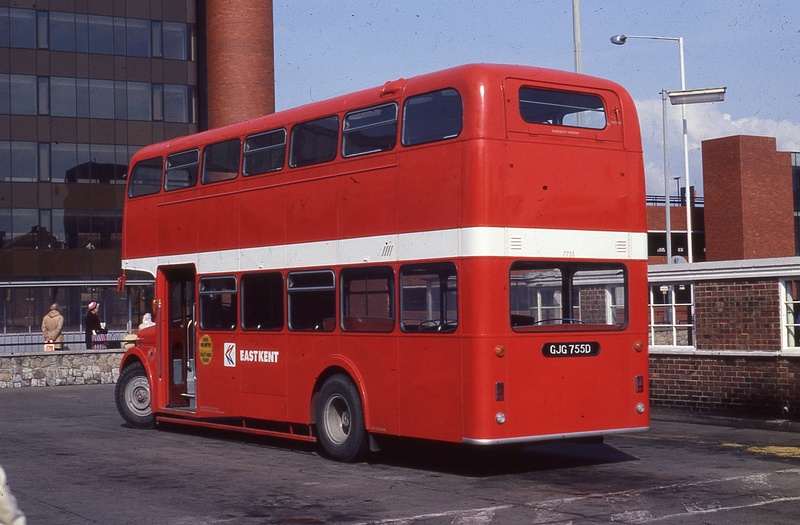 well liked maroon & cream livery helped to lessen that. Here from the back we see the stark boxy appearance of an example from one of the later batches of AEC Regent V's, a 1966 delivery. NBC's Poppy red and standard colour grey wheels (whoever dreamed up that combination must have been what colour co-ordination specialists have for niightmares!) certainly did not endear these machines to enthusiasts at the time. It looked marginally better on the green liveried fleets