Perhaps this is an odd choice for a heading photo 'cos it's not on the road in actual service. Older browsers might recall the occasions in the early 1960s when Bradford Corporation kept restored Tram No.104 (it had been rescued from use as a football spectators stand at Odsal Stadium) at Thornbury Works and allowed it out a few times onto the old tracks there drawing current from the trolleybus overhead to give enthusiasts rides (and, for a charge - ten bob I think - a short driving experience) This was, as I recall, the penultimate occasion on which this occurred, 20th April 1963. This tram now rests in the Bradford Industrial Museum and sadly can't go anywhere. Bradfords non-standard 4-foot guage track means that it cannot operate at anywhere like Blackpool, Crich or Carlton Colville.

I'm sad to say that I never got to Sheffield or Glasgow in their tram era, so my home tram experiences in the sixties and seventies were restricted to dear old Blackpool and a one-off visit in 1969 to The Isle of Man, so there won't be much variety on this page, although I hope it will be of interest. There's a separate one for Britains 'new' tramways.

From 1962 to 1966 I made three or four visits to Britain's only remaining real tramway and what appears here is a mix of the photos obtained then. I went on a couple of enthusiasts tours including a ride on Dreadnought 59. Sadly, since 1985 I've not returned apart from a quick stop last year at Fleetwood. I don't much like the horrible disfigurement of the 'balloons' or the various old and newer single-deckers with garish commercial advertising nowadays but I suppose (like Lisbon) it's a necessary evil to be endured so that the system remains on the best possible financial footing. Now, as the second decade of the twenty-first century is halfway through a mulit-million pound re-vamp of the coastal line has  been completed and resulted in a completely new fleet of modern state of the art continental style trams trams. I have yet to see these but hope to be able to rectify that later this year. When I do I will post some photographs * just think about that! If, say, the average admission paid was 7/- (35p) an audience of 1500 would produce not much over £500 to be shared between these top rated stars, the promoter and the theatre. Still, if they got £50 each and did seven shows a week their £350 pay packet was near to twenty times the average wage then. Just another example of the changing value of money over four to five decades! 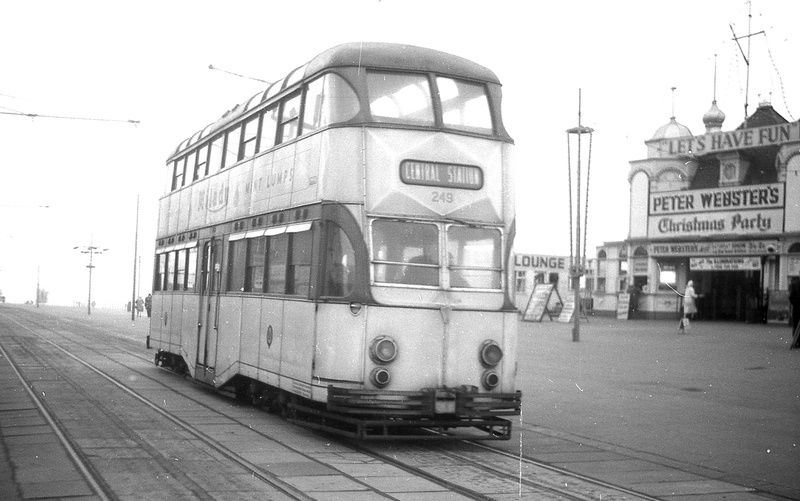 I'm placing this second shot of a 'Balloon' car here  - another from November 1962. Looking closely at the image I realised that here the track surface then still showed (I presume) where had been the conduit system central (current collecting) rail with which the system commenced over seventy-five years previously. The conduit system was removed in 1899 but surely the running lines in situ were not then 63 or more years old?? 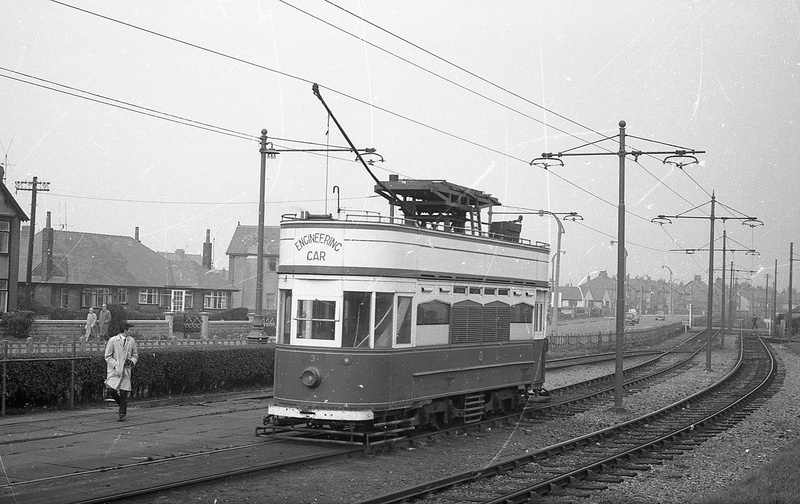 Here comes the cavalry! - Enginering staff arrive to sort out the problem for Standard car No. 160 - see below For many years this 'boat' tram was sponsored by Shell Petroleum 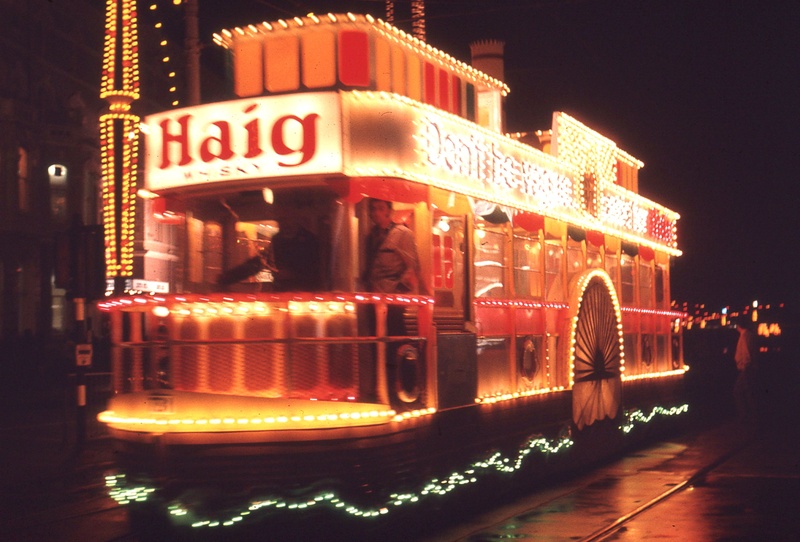 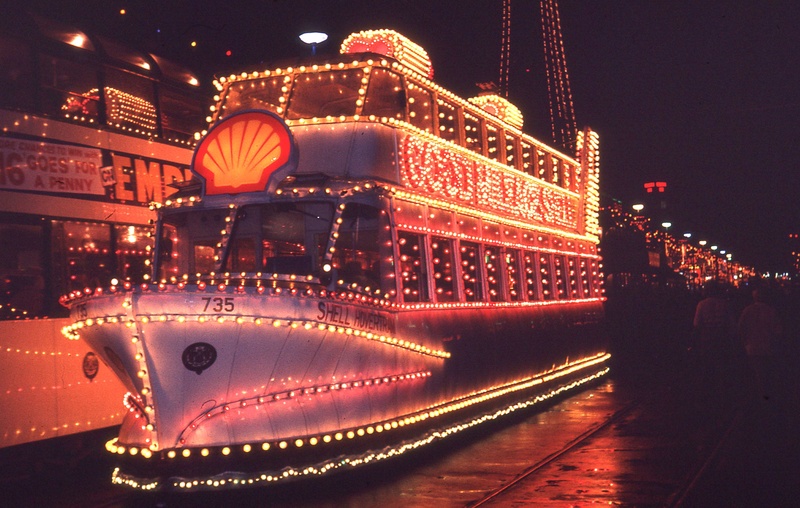 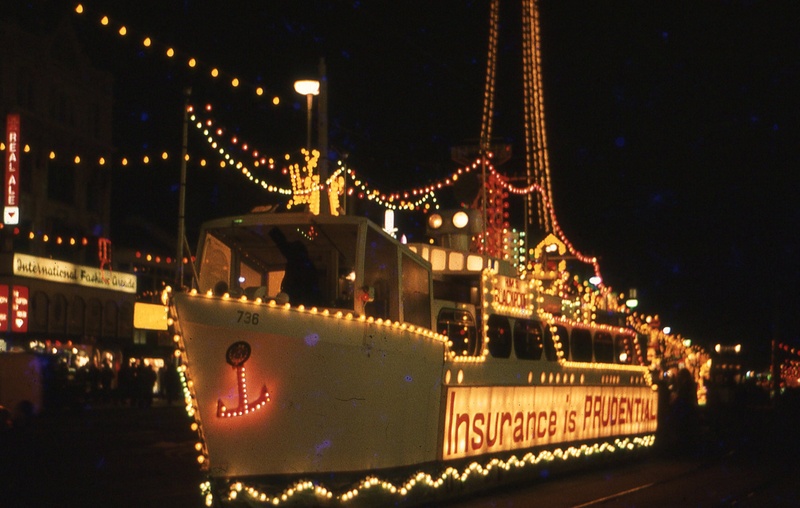 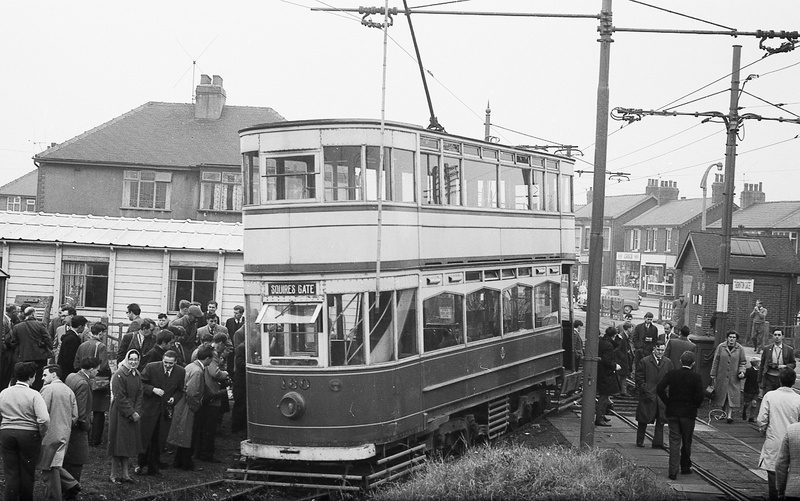 I participated in couple of organised tours in the sixties. On this occasion which was 1964 I think, to co-incide with ending of services to North Station, a Standard was hired. Unfortunately the organisers wanted to take the car onto the little used Thornton Gate sidings whence it promptly derailed. Closeness of the car to the main running line can be judged. The through service was thankfully not significantyly interrupted, but presence of the engineering car (see above) must have resulted in some temporary wrong-line running,  Putting this problem right took the engineers quite a while I recall though I cannot remember exactly what happened.. Passengers have alighted to observe the problem and its subsequent rectification. 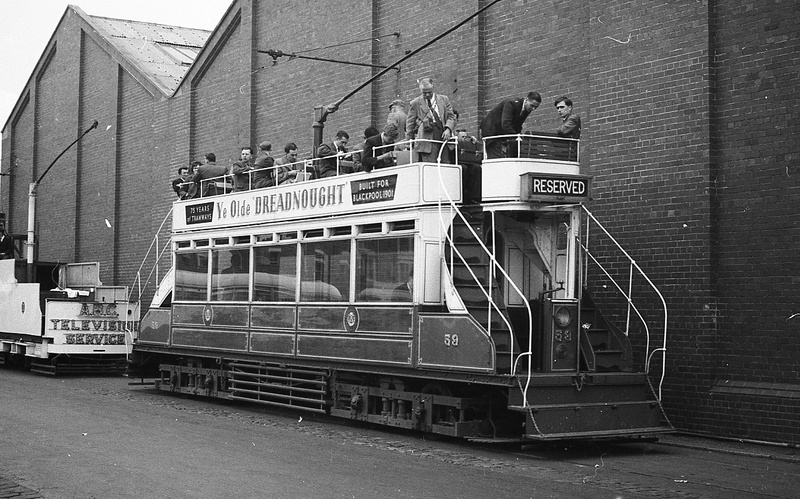 Another tour was aboard the famous Dreadnought No. 59 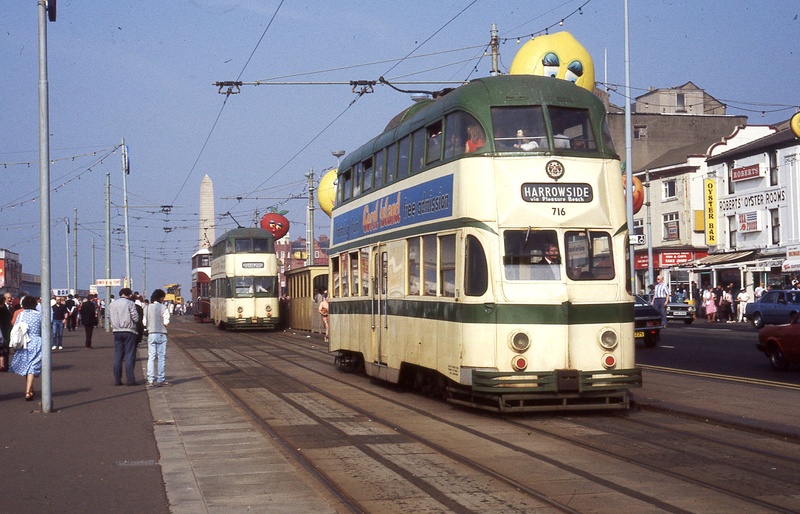 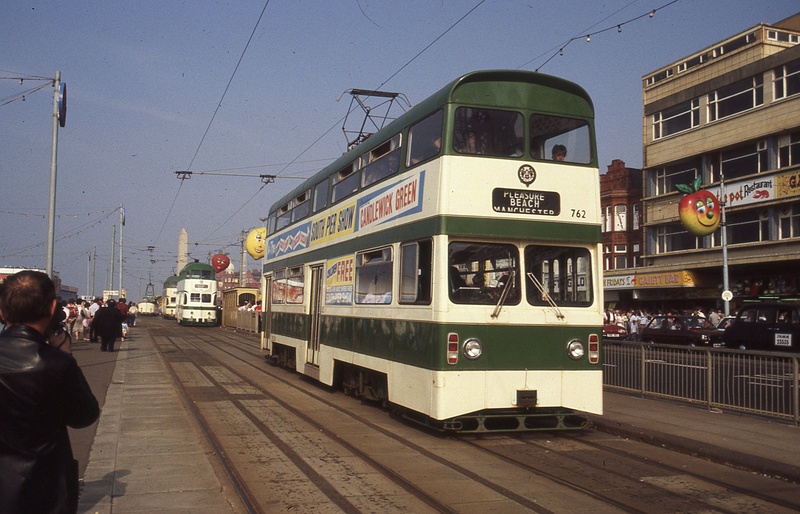 Yuk!  - Looking rather like a couple of Leyland Atlantean buses joined end to end this creation was in frequent use 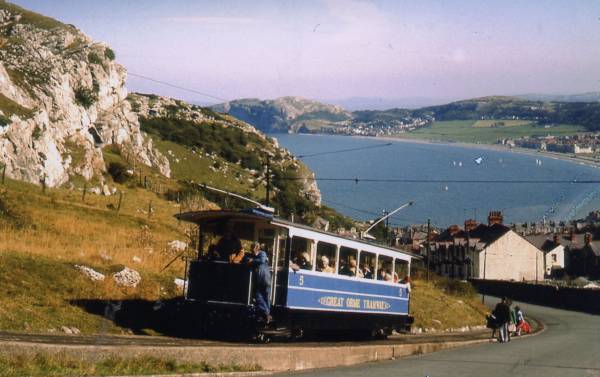 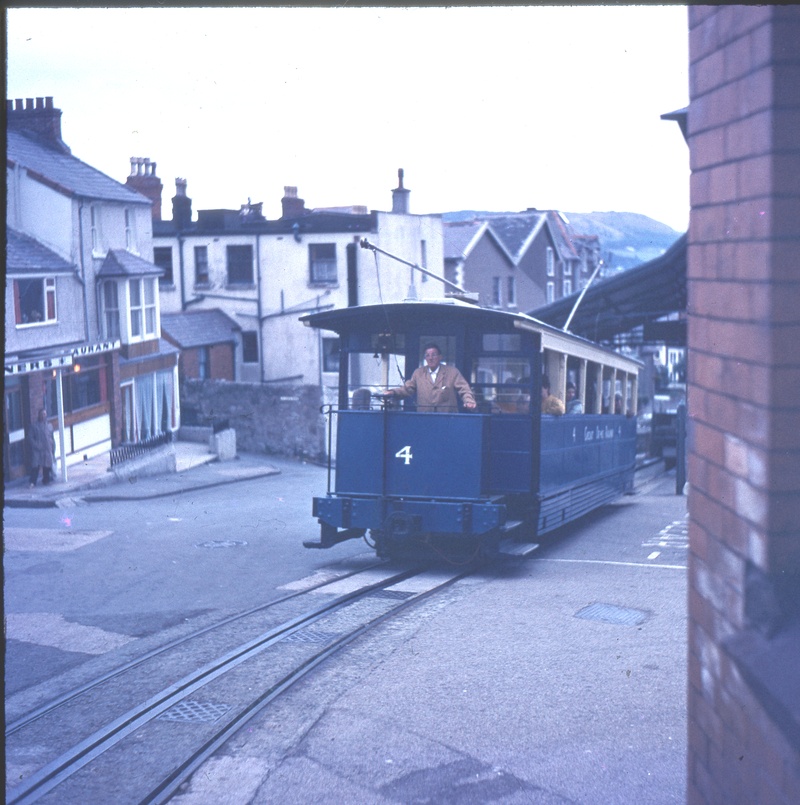 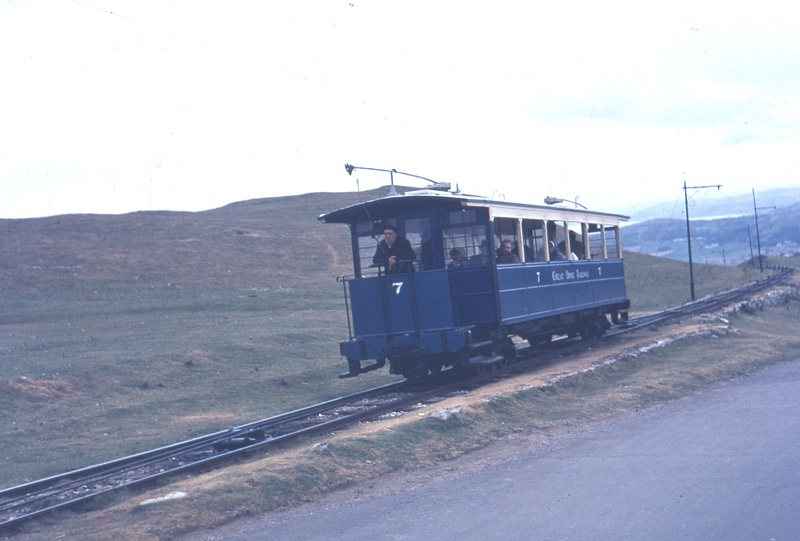 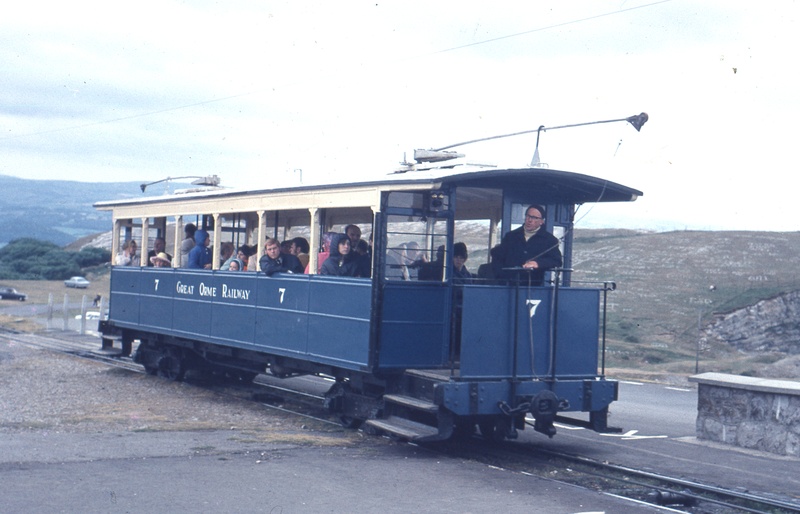 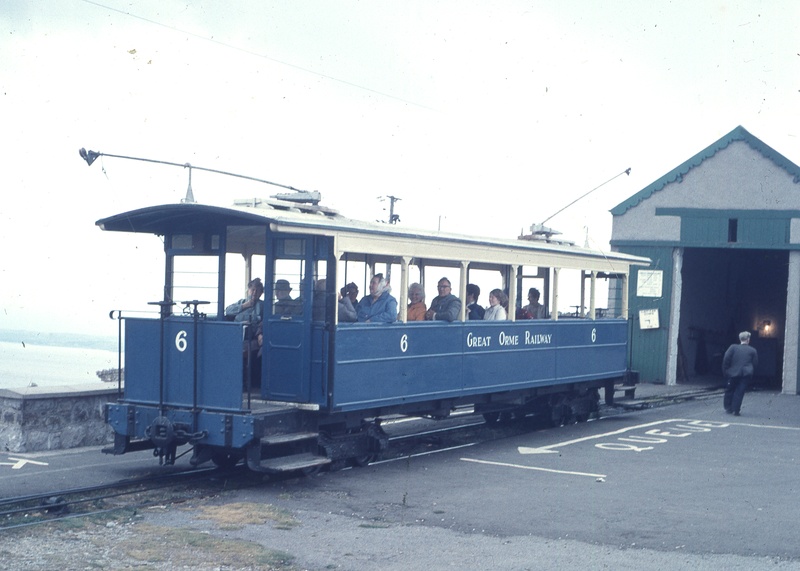 The famous Great Orme Tramway at Llandudno in North Wales. This is a cable-hauled operation and the cars are permanently attached so arguably it is a funicular rather than a pure cable tramway. In fact there are two separate lines with a transfer station halfway to the summit. The overhead wire and trolleypole were simply for telephone communication but modern developments mean that they no longer need to use this now. The top view is from 1977 whilst the others, showing the cars in their then rather bland livery are from a very dull and windy day in 1969. I went again in 1978 and made further visits in the first decade of this century so will add more shots in due course. Modern Electric Tramways at Eastbourne was a tourist line using scaled down replicas of different types of British Tram. The line was moved lock stock and barrel to Seaton in Devon in 197X. It now operates on a scenic former railway branch line trackbed at a wider gauge. Existing cars were rebuilt for this and many new ones have been added since.Both these still operate and No. 6 now boast a different seating layout on the lower deck. Thes two views are from about 1966. Here's a few at Seaton in 2007 to start the ball rolling.............. 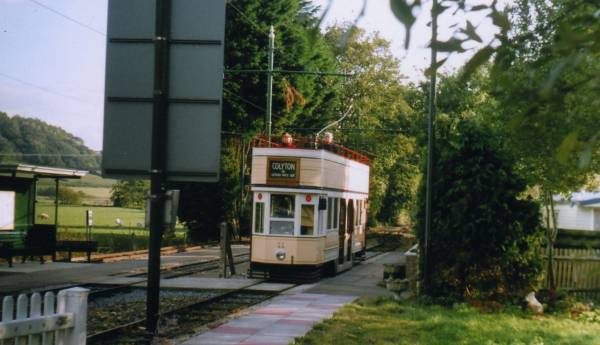